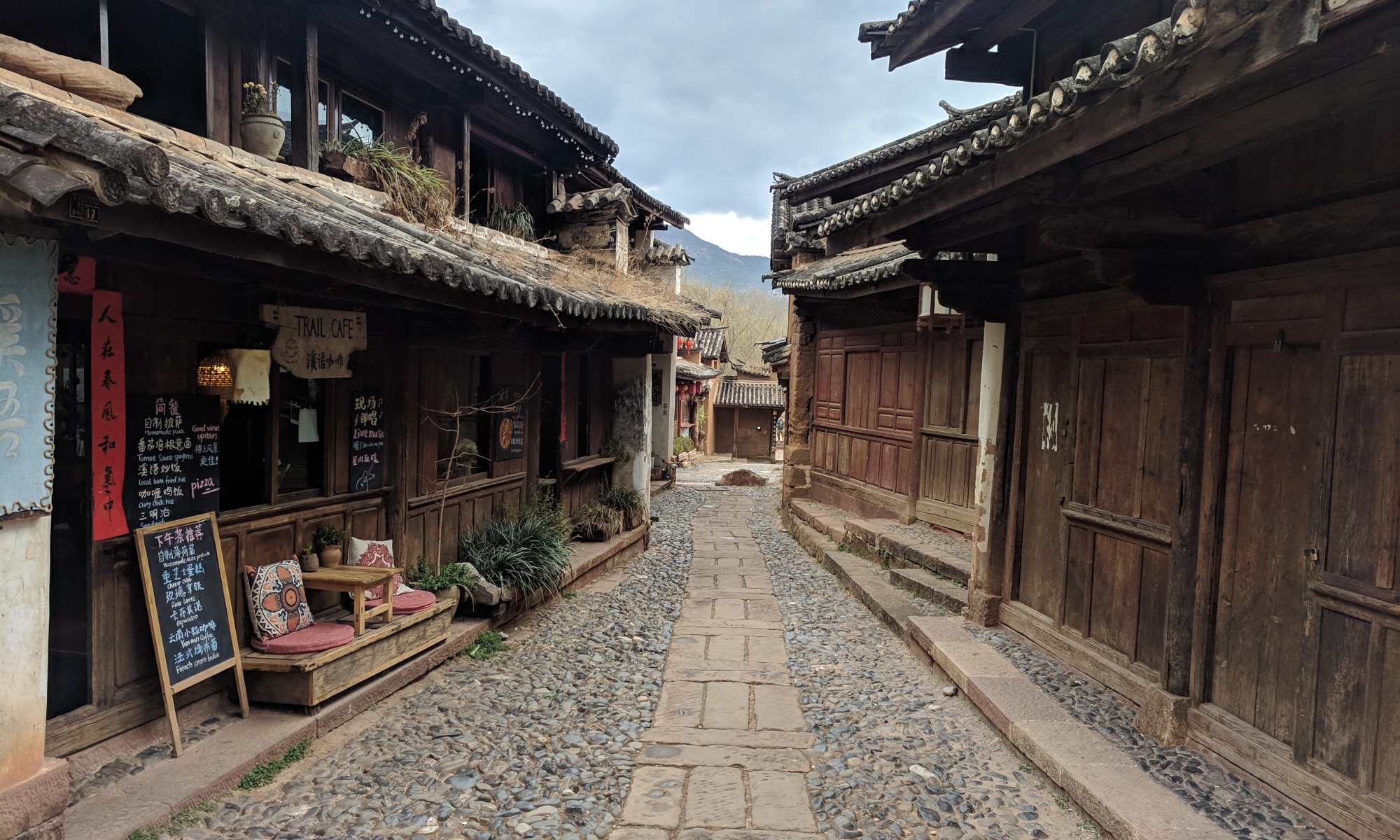 Here comes another “10 Things…” post. As per usual, this is not meant to be a top 10 list or anything like that, rather it will be 10-ish random things, some good/bad/neutral, that we experienced during our trip in a particular country or region that we found interesting or unique. Usually we’ll write this post after we leave a place as a way of summarizing our experience.

On a quasi-whim, we crossed overland from northern Vietnam to Yunnan Province (云南), where we spent ten days exploring this scenic and mountainous province of southwestern China. It turned out to be an unforgettable experience, and we are so glad we went.

Before we dive in, here’s a map showing where Yunnan is located in China. It borders Vietnam, Laos, and Myanmar on its southern edge. To enter Yunnan, we crossed on foot from Vietnam at the Lao Cai – Hekou border, which is not far from Sapa.

We are still planning to return to China for an extended period of time in the summer, when we will see some of the larger cities and classic tourist sites. However, we saw so many new and interesting things in Yunnan that we felt compelled to give it its own 10 Things… post. Here goes!

China is expanding its transportation network at an incredible rate. Roads, bridges, trains, and planes are reaching new places daily. This is especially evident while traveling in Yunnan, which is on the current frontier in the expansion of this network. Many of the trains and highways we rode on were brand new, and construction of new infrastructure can be seen throughout the province. Even our 2017 edition of Lonely Planet China was out-of-date when it came to the existence of some train routes. The train we took from the Vietnam border (Hekou) to Kunming and the High Speed Rail line from Kunming to Lijiang were both opened recently. There is also a high speed rail route under construction from Kunming to Bangkok via Vientiane which is planned to open soon. To see a map of the current high speed rail system and planned routes (in grey), check out this map.

It’s not just transportation routes that are under construction in Yunnan Province: housing, hotels, restaurants, tourist infrastructure, and civil works are rapidly expanding as well. At Tiger Leaping Gorge, an enormous tunnel, bridge, and new highway are under construction, obliterating a mountainside. While trekking in the gorge, we also noticed many new guesthouses being hastily built to accommodate more tourists. In Dali, the amount of new home construction going on in the hills above Lake Erhai is staggering. We hypothesize that this might have something to do with the systematic demolition of buildings along the lake, which was recently undertaken to reduce environmental impacts to the lake.

China has committed to electric vehicles in a big way! Coming from Vietnam, where the exhaust and engine noise from motorbikes is relentless, we were shocked to set foot in Hekou, China and realize that traffic was silent. Most of the taxis, public buses, and motorbikes we saw were electric. Many of the cars we saw were high-end electric SUVs or sedans. We’ve seen photos of smoggy, traffic-filled Beijing, but our experience in Yunnan could not have been more different! The skies were clear, and the traffic was relatively clean and almost eerily quiet.

In Southeast Asia, fellow western travelers are everywhere. Traveling in Yunnan, we quickly realized that as westerners we represent a very small slice of the overall tourism pie! Yunnan is extremely popular with domestic Chinese tourists (remember there are ~1.4 billion people in China), and many of them flock to Dali (大理), Lijiang (丽江), and the surrounding areas for vacation. For us, it was an interesting change of pace to visit a place that does not cater to foreign tourists. Hardly anybody speaks English in Yunnan, and the text on signage, menus, buses, etc is typically written only in Chinese characters.

One of the major draws for domestic and foreign tourists alike is the preserved and pseudo-preserved architecture in the old towns in Lijiang and Dali. Ironically, Lijiang became a popular tourist destination after being severely damaged in an earthquake in 1996 (EERI report link). News coverage of the devastation publicized the city’s beauty to the whole country, and it inspired many Chinese people from other provinces to vacation, move, and open businesses in Lijiang. During the rebuilding process, the city heavily commercialized, and most of the original Naxi residents left the city as new residents moved in. Extensive efforts were also made to preserve the traditional architecture of the city, but many report that a lot of the original character was lost. Even without an earthquake, a similar phenomenon has occurred in Dali as many new residents move in and many of the original Bai residents depart.

Despite the “Disneyfication” of these historic places, it’s easy to see the reason tourists are so charmed by Lijiang and Dali. One can spend hours upon hours meandering the seemingly endless old streets, admiring the water features and snacking on delicious food. Their mountainous setting and good air quality only add to their allure.

Dali is the historic home of the Bai people, and the dominant style of architecture in Dali and Shaxi is Bai. The elements are very distinctive and it’s striking to see how uniformly applied this style is to nearly all buildings in Dali (new and old)! Bai houses are painted white and covered in small paintings of scenery from nature and sculptural detailing. Roofs are tiled with upturned corners.

This was a very interesting phenomenon that we had no idea about. Remember, there is no Google, Facebook, Instagram, Twitter, YouTube, or WhatsApp in China. So, what do people use to communicate, share photos, and do business? The answer, for a huge percentage of people in China, is WeChat. WeChat is a Chinese messaging app that allows people to text, share photos, and even pay for things using WeChat Pay. It is known as the “app for everything” because almost every task in your daily life can be facilitated using WeChat. Everyone we met used WeChat and every hotel we stayed at preferred to communicate over WeChat, rather than phone or email. At restaurants, we seemed to be the only ones paying with cash, everyone else was using WeChat Pay to pay their bills electronically. There are also little QR codes pasted everywhere, that when scanned with WeChat, will give you real time information on transit schedules, public service announcements, advertisements, or special offers from a business.

We learned that a popular activity is to have a professional photographer take glamour shots of you! We saw many people doing this around Yunnan.

Random People Asking Us to be in their Group Photos

For the first time on our travels, we were asked to pose in random photos with people we don’t know. This happened the most often in Lijiang. Next time this happens to us, we will ask to get a photo with out camera, too!

There was once a Silk Road-esque network of caravan routes which wove through Yunnan, Sichuan, and Tibet. Horses from Tibet and tea from Yunnan were some of the more commonly traded items — thus the name! Much of the trails and towns have disappeared since the routes fell out of use, but the old market town of Shaxi (沙溪) remains well preserved. Shaxi is a delightful and atmospheric place to relax for a couple days. The town prides itself on its mushrooms, honey, and infused rice wines.

On Fridays, there is a huge market in Shaxi which attracts people from throughout the area. There is a live animal market featuring horses, cows, goats, and more. The main market has produce, meat, household goods, snacks, candy and so much more. Most shoppers wear baskets on their backs and don’t leave until they are overflowing!

If you’ve ever tried Pu’er tea, it comes from Yunnan! Pu’er is a fermented dark tea that comes from ancient trees. It is considered a delicacy and some aged tea cakes have sold for insanely large amounts of money. There was a even a Pu’er investment “bubble” that burst in 2007 following a ten-year boom during which the price of Pu’er increased rapidly.

February turned out to be an ideal month to travel in Yunnan Province. It was cold, but there were virtually no people! Fortunately, we were visiting during the “low-season” — we read many warning about throngs of tourists in the high-season. While cold, the weather was relatively dry, and we were unhindered in our daily explorations. The Tiger Leaping Gorge trek was chilly at night, but the guesthouses along the trail are well supplied with warm food, hot showers, and powerful electric blankets.