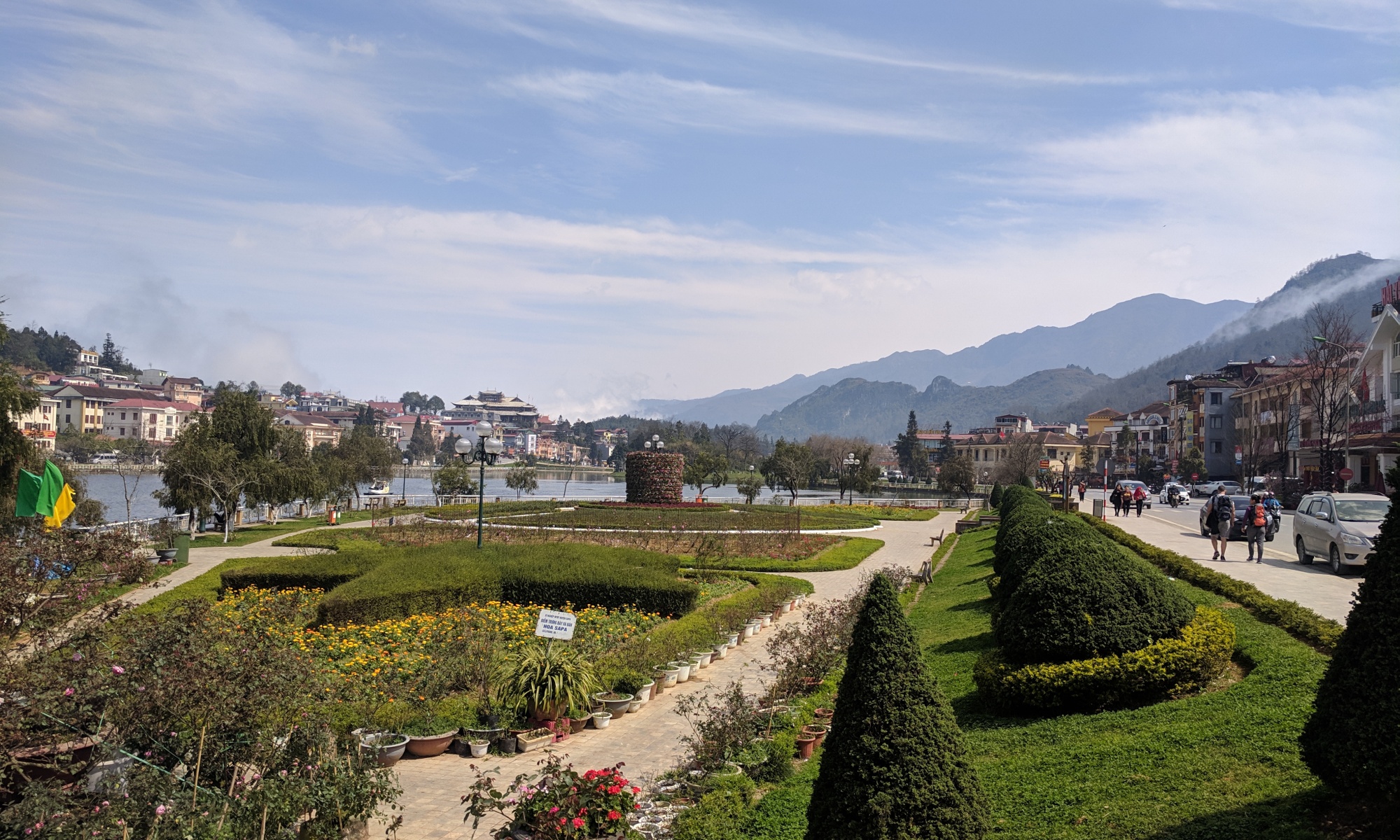 Here comes another “10 Things…” post. As per usual, this is not meant to be a top 10 list or anything like that, rather it will be 10-ish random things, some good/bad/neutral, that we experienced during our trip in a particular country that we found interesting or unique. Usually we’ll write this post after we leave a country as a way of summarizing our experience.

We spent nearly a month in Vietnam and we really loved exploring this diverse and interesting country. From the people, to the landscapes, to the food, there is so much to experience while traveling in Vietnam. We could write a separate blog post for almost every item on this list and still not do it justice. In fact, this post was so large we had to split it into two. This is actually the second half! If you want to check out the first five things, visit this post.

We’ll lead the second half of this post with a lighter topic and something you can’t help but notice when you are in Vietnam, which is: cute doggies are everywhere! Many countries around the world have dogs wandering the streets, but often times they can be scary, mean, sick, or poorly cared for. This was not our experience in Vietnam. In fact, without even meaning to, we ended up with an album full of adorable dog photos. Most of the dogs we saw were mutts of a particularly cute shape and size, as if they were all part-Corgi. Most of them were also surprisingly well-cared for. An obvious question is what happens to all of the less-cute dogs, but to delve into that would probably bring us to a much darker place. Instead, we’ll just cut to the photos…

Vietnamese food is diverse and delicious! Every region of Vietnam has its own local specialties, as well their own unique twist on the familiar staples. Coming from California, we are used to seeing Pho, Banh Mi, and spring rolls in restaurants, thanks to the large population of immigrants from Vietnam. However, we discovered there is so much more to Vietnamese cuisine than what we have at home.

Pho (pronounced fuuuuuuuh?) is popular throughout Vietnam, though different regions have their preferred styles. Pho is a noodle soup, typically made with a beef broth, and topped with slices of cooked beef and various other parts of the cow. Fresh herbs and vegetables such as: basil, mint, bean sprouts, limes, chilis, garlic, cilantro, and green onion are provided on the side for toppings.

The word Pho actually refers to the type of noodles that are used to make the soup. Pho are wide flat rice noodles, made freshly every day, and added to the broth to form the basis of the dish.

Interestingly, Pho is mostly eaten for breakfast! But also enjoyed for lunch and dinner. One explanation we heard for this is that the cows are butchered in the early morning, and therefore the freshest beef is available around breakfast-time. As with all Vietnamese food listed here, freshness is key. In most restaurants, all the ingredients used to make a dish are bought from a local market the morning before or mere hours before the dish is prepared. Often times the restaurant will send someone to the market two or three times a day to stock up on supplies if they begin to run out.

Springs rolls are pretty much the same as what we have in the US. There are fresh versions and fried versions with various types of fillings. They are a great snack at all times of day and readily available throughout Vietnam.

Banh Mi is very much an eastern-western fusion dish that is popular throughout Vietnam. At its core, Banh Mi is a sandwich made from a french baguette, but there are endless variations that spin out from there. In Ho Chi Minh City, the Banh Mi we ate were filled with sliced deli meat and pickles, each slice of bread being well lubricated with liver pate and mayonnaise. In the north, it is more typical to see the sandwich filled with seasoned barbecued pork. We even had a Banh Mi in Hoi An that added melted cheese and avocado. It was amazing.

A meal of Bun Cha consists of barbecued pork meatballs swimming in a sweet, tangy dipping sauce with jicama and carrot, served with heaping piles of rice vermicelli and herbs. It is most popular in Hanoi, where it also originated. The real challenge with Bun Cha is how to eat it — we had three different people tell us three different ways of eating it and we still aren’t sure we are doing it right. Apparently some people dip, some people dunk, some people make a soup, and some people roll all the herbs together with the noodles and eat it like a spring roll.

Bun Cha’s pop culture moment came when Barack Obama and Anthony Bourdain ate it together while Obama was visiting Vietnam in 2016.

There are several savory specialties in Hue made with rice flour. These are popularly referred to as “royal rice cakes”. They were very fun to try.

Similar to Hue, Hoi An has a variety of local specialties. Our hostel owner took us on a great food tour to various street food stands around town to try each dish. Most famous in Hoi An is Cao Lau, which is noodles in a curry-sauce mixed together with salad and herbs. We tried many other local specialties that are hard to describe but equally interesting and delicious.

Some final notes on food…

Obviously, this is only a very small cross section of the cuisine, based on what we actually ate. But we saw and were intrigued by many more dishes that we didn’t have time to try. For breakfast, we mostly had noodle soup, fried noodles, or fried rice. For lunch and dinner we would typically eat one of the foods listed above from an affordable and delicious street-side restaurant. If you travel in Vietnam, you will immediately notice that many restaurants and street food stalls explode onto the street and offer seating around very small plastic tables with very tiny plastic chairs. This is a good indication that the place is frequented by Vietnamese people instead of tourists and the food will be excellent.

One of the surprising beverages advertised throughout Vietnam is “egg coffee”. Think of it as caffeinated custard! Honestly, we avoided drinking egg coffee until we were forced to try it in our cooking class. Turns out, it’s delicious! To make it, you whisk egg yolks, condensed milk, sugar, and a tiny bit of vodka together. Then you pour espresso into it.

Coffee in Vietnam is delicious and strong. We were hooked on the stuff. What is that makes it so good? Is it the highly caffeinated robusta beans that taste like chocolate? The slow drip brewing? Or the heaps of condensed milk usually poured into each glass? We may never know.

We spent about 5 days traveling around Sapa and it was a very rewarding experience. The Sapa region is known for beautiful mountains, terraced rice paddies, and a multitude of hill tribes – formerly nomadic peoples that have settled in the area. A partial list of the tribes in the region includes the Black Hmong, Red Dao, Tay, and Giay Peoples, each with their own culture, traditions, language, and dress. A popular tourist activity in Sapa is to book a trek with a local guide who will take you to the remote tribal villages where you can observe and partake in their everyday life.

However, the explosion of tourism in the region has created a whole host of ethical issues involving the local people. The amount of money pouring in from tourists has created a system of codependency and leaves the door open for exploitation. In Sapa, it is common to see a child begging or an adult persistently offering to take you to their village for a fee. Booking a tour presents a dilemma because you want to make sure your tourism dollars are going to benefit the local people directly and not create an overly disruptive system to their way of life. Fortunately, most of the highly rated tour groups on TripAdvisor are either run directly by local people or appear to offer sustainable employment.

After a few days spent exploring Sapa and the surrounding countryside we decided on booking a two-day, one-night trek with Ethos, a highly-rated company employing mostly Black Hmong guides. We arrived in the morning and met our guide, So, a Black Hmong woman who is slightly older than us and has three children. Her English was perfect and after introducing ourselves we set out on our trek. We hiked about 8 miles through remote villages and rice paddies before arriving at So’s home for lunch.

After a delicious and satisfying meal we spent the afternoon hiking in the hills and observing local people collecting firewood and working the land. That night we stayed at So’s house and met her husband, three children, her adopted niece and mother-in-law.

The following day we hiked another 8 miles to a village where her cousin lived and had lunch with her family. Overall it was a worthwhile and eye-opening experience into another person’s way of life.

Tet is the name for Vietnam’s Lunar New Year Celebration that gets the whole country stirred up into a frenzy. It is the most important time of year for most, if not all, Vietnamese people, and the week long celebrations are like birthdays, Christmas, and new years all rolled into one. Tet is a very family-focused holiday and many people travel home for 10 days to celebrate with their family. Most business are closed for 5-10 days during Tet and transport before and after can be expensive and crowded. Because of this, many travel guides recommend you do not travel in Vietnam during Tet. That is generally a good recommendation if you only have a week to travel in Vietnam, but since we were already there it was no bother for us. It was actually pretty cool to see all the traditions first-hand and take part in the jovial ambiance.

In preparation for Tet, people clean their homes and decorate them with flowers and plants. Each region decorates with different materials. In Central Vietnam, we saw mostly citrus trees and chrysanthemums. In the north, cherry blossoms were very common. Many people also use it as an opportunity to close out the old year and bring in the new by getting new haircuts and clothing.

During Tet, many people visit temples to make wishes and prayers for the new year. We visited a few temples in Hanoi during Tet and they were packed.

Year of the Pig

This lunar year is the year of the pig and the pig theme was everywhere in Vietnam.

If you made it this far, congratulations! We are currently in Nepal and Chiara is preparing for her first day of work on Monday. Before then, we are trying to get caught up with blog posts from our trip to China, so expect more updates soon!